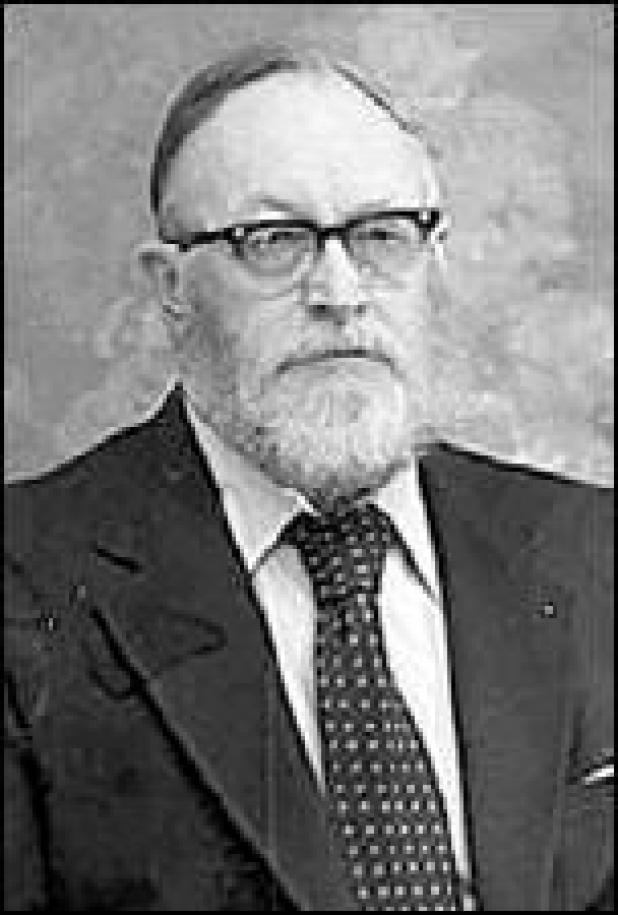 When Britton area telephone man Robert Perry saw the state of Fort Sisseton in the mid-1950’s, his heart was stirred.

Something had to be done to save the crumbling buildings and preserve local history. And done it was. Fort Sisseton is now celebrating 60 years as a state park, is in remarkable shape for its 155 years, and has become a local favorite for weddings, reenactments, theater, and gatherings. Much of that is thanks to Robert John Perry and his affinity for history and community involvement.

This coming month, Perry will be honored in a unique way with a special exhibit opening on Saturday at Fort Sisseton State Historic Park entitled, “The Fort Sisseton Kid.” This exhibit, in conjunction with a special 60th Anniversary exhibit that chronologically shows the dedication and perseverance that have taken place over the years to make the beloved Fort what it is today, details the work Perry accomplished over the years at the historic Fort.

Perry was born May 29, 1916, in Aberdeen, the son of Judge Van Buren and Elise Perry. He graduated from Aberdeen Central High School in 1935. He started college at Northern Normal and Industrial School but was forced to quit after two years due to rough economic times.

In his early 20’s, Perry began his career with the Dakota Central Telephone Company, which later became Northwestern Bell Telephone. This led him to various places, including Frederick in the 1940’s.

While there, Perry joined their fire department. He helped raise money for new fire equipment, set up a rescue unit, and even set up something we take for granted today - a mutual aid association. Near his last years in Frederick, Perry saved the life of a young boy after an accident. Perry received an award for his quick action.

History was a passion instilled within Perry by his father. While growing up, the family would visit local historical places of interest. This included many visits to Fort Sisseton in the late 1920’s and 1930’s. Fort Sisseton was never far from Perry’s mind.

By 1953, he became manager of the Britton telephone location. Part of his job with Northwestern Bell was checking phone lines, which led him to Fort Sisseton.

Fort Sisseton had a phone line still within its boundaries that was installed during the 1920’s when Colonel William Boyce operated the famous hunting lodge there. This phone line was in place for many reasons, including allowing D.C. senators and congressmen to call back their votes to the U.S. Capitol. When Perry used this excuse to check on the Fort, he saw the state the buildings were in, and he was devastated.

In the 50’s and 60’s, Perry earned his nickname of the “Fort Sisseton Kid” from Aberdeen American News editor Max Cooper, due to his incessant focus on Fort Sisseton and his never-wearying desire to see it restored and preserved. To say he became obsessed with the local landmark would be an understatement.

He worked tirelessly to secure support for the preservation of Fort Sisseton from a variety of individuals through calls, visits, and letters. Perry lobbied many politicians for Fort Sisseton to become a state park.

By the late 1950’s, Perry and a friend from Britton were able to secure the agricultural lease on Fort Sisseton for themselves. When questioned where their livestock was, Perry, tongue in cheek, informed questioners that he had a herd of 175 deer on the premises and he planned to add antelope as well. No one seemed to challenge that statement.

In 1958, the Britton Lions Club, under the direction of Perry (who argued he was never a politician, but yet could navigate the world of politics very well), submitted petitions to South Dakota Governor Joe Foss for Fort Sisseton to be named a state park. The state legislative research council subcommittee that would handle this petition decided they would meet regarding Fort Sisseton.

Having them simply meet to discuss Fort Sisseton was not enough for Perry. “The Kid” would only be happy if the politicians would meet at Fort Sisseton itself. While the politicians turned him down initially, the on-site meeting with the legislative subcommittee was approved on May 30, 1958. Perry had two days to make the Fort presentable for the June 2 engagement.

Perry chose to hold the event in the Library/Schoolhouse due to it being one of the best persevered buildings on the grounds. Perry was able to use his connections within the Lions Club, the North Marshall Fire Department, and the local veterans’ club to get much needed equipment and supplies. Perry’s efforts were not in vain. A large crowd showed up to support the Fort becoming a state park. It was also during this period of time that Perry was named to the State Parks Association Board.

After the June 2 meeting, Perry appeared three separate times before the South Dakota legislature regarding the issue of Fort Sisseton. On his last appearance, he was told that the legislature does not make a practice of funding museums. Perry immediately responded by saying, “Fort Sisseton is not to be a museum. It is to be a state park and interpretive center.”

The legislators were taken aback by this quick-witted response. That day, they voted to bring Fort Sisseton under the umbrella of the South Dakota state parks system. An excited Perry immediately wrote newly inaugurated Governor Ralph Herseth saying, “Now that both the House and the Senate have passed House Bill 677, it looks like our dream is at last in your hands. We hope that you, as governor, are willing to sign the bill making Fort Sisseton into a state park.”

On March 2, 1959, that dream became reality for the “Fort Sisseton Kid,” as Governor Herseth signed the bill naming Fort Sisseton a state park. A formal dedication ceremony was held at Fort Sisseton on July 26, 1959. The ceremony was coordinated by the Britton Lions Club and Perry. Governor Herseth and state historian Will Robinson were present, along with Rev. Abe Crawford, a Sisseton Dakota Sioux giving the invocation and benediction, and none other than Perry serving as master of ceremonies.

Perry’s obsession with Fort Sisseton did not diminish with the creation of the new state park. He spent many years working towards restoration of the Fort, which included using labor from the South Dakota State Penitentiary. Perry also petitioned many Washington, D.C. politicians three different times to name Fort Sisseton as a National Historical site with the National Parks Service.

While this was unsuccessful, he did not dim in his efforts for his beloved Fort Sisseton. Perry was able to return one of the original cannons to Fort Sisseton. He was also instrumental in many of the early historical festivals. Perry’s research archives are still used at Fort Sisseton for various projects.

When Governor Bill Janklow established the Governor’s Commission on FortSisseton,Perrywasthefirst chairman. His daughter, Judy Perry Gulleson, now holds this same position. Through the commission, a fund was established to help return artifacts and purchase historically accurate items for Fort Sisseton. This still-active fund is named the Bob Perry Acquisition Fund.

While it seems that one cannot divorce Fort Sisseton from Bob Perry, or Bob Perry from Fort Sisseton, one also must remember that grass never grew under Perry’s feet, virtually until his dying day.

Perry was one of the original purchasers of the Prayer Rock that was moved from near Lake Tewakan in North Dakota, first to Fort Sisseton, and then to its final home in Britton. Perry also helped establish the Prayer Rock Museum in Britton, he led the charge to have Sica Hollow named a state park and also a natural national landmark in 1971, and he established the J.L.W. Zietlow Telephone Museum in Aberdeen.

Because of Perry’s research on Fort Sisseton, Sica Hollow, northeastern South Dakota and the Sisseton-Wahpeton Oyate, a textbook entitled, “Prayer Rock,” was published. This textbook was used within Aberdeen Public School System for many years.

Perry retired back to Aberdeen where he grew up. During retirement, he was on the Aberdeen City Council. He helped establish Centennial Village at the Brown County Fairgrounds. Perry also volunteered countless hours at the South Dakota School for the Blind and Visually Handicapped. He helped students in their shop class, as well learning their braille. Perry and others brought students from SDSBVI to Sica Hollow and Fort Sisseton as part of their frequent camping and fishing trips to Clear Lake.

Perry received numerous awards and citations for his work, including: President of the United States Commendation for Exceptional Service to Others, and Order of the White Buffalo, from Governor Frank Farrar, both in 1971. He received the Angus Award for Spirit of Service from the Telephone Pioneers of America in 1985, South Dakota Volunteer of the year 1987, and the Ben Black Elk Award from Governor Mickelson in 1989. Perry was inducted into the South Dakota Hall of Fame in 1993 for his efforts at Fort Sisseton.

Shortly before he died in 1998, Perry said, “If a town is not a better place for my having lived in it, then I’m not worth very much, am I?” All one has to do is look at the exhaustive list of accomplishments that the “Fort Sisseton Kid” achieved in his 82 years. It is easy to agree that Robert Perry left northeastern South Dakota much, much better, and one could argue richer, than he found it.

Fort Sisseton’s celebration on Saturday marking the 60th anniversary of it being made a South Dakota State Park will be capped off with an old-time baseball game at 5 p.m..

The Fort Sisseton Soldiers will tangle with the Colorado All-Stars in an 1864-era contest.

There are records showing soldiers at the fort played baseball as a form of entertainment, according to Fort Sisseton Park Manager Ali Tonsfeldt. Players, who have been gathered from around the area, will be wearing Civil War-era army uniforms while playing the All-Stars, a team dedicated to playing vintage baseball.

It may take the local players a few innings to adjust to some pretty big changes in the game of baseball during the past 150 years. Tonsfeldt said that includes making sure a run gets counted.

“When you score, you’re required to walk up to the scoreboard desk and ring the bell and tell the person, ‘Tally one up for me ma’am or sir. If you do not say ma’am or sir your score does not count.”

Other noticeable changes will be the ball used in the contest, players are not allowed to wear gloves, and if a ball is caught on one bounce it will count as an out.

Wood bats of all shapes and sizes will be allowed and fielders can throw the ball at baserunners. If the runner is hit, he will be called out. Fans watching will also be encouraged to heckle the players.

Tonsfeldt said the only person allowed to bring a gun to the game is the umpire, and he is required to wear a six-shooter on his hip with the purpose of shooting any varmints that run out on the field. She did add that Saturday’s umpire will only be shooting blanks.

The Britton Lions Club will be serving classic baseball concessions including hot dogs, popcorn, Cracker Jacks, and peanuts, and the Eden Lions will serve lemonade. Funds raised will go towards a playground at the Fort.

Other activities being held on Saturday as part of the 60th Anniversary celebration will include living history demonstrations, a scavenger hunt, kids crafts, and tours of the buildings from noon-4:30 p.m. A Dutch oven class “Cooking for the Family” is set for 1 p.m., and a cake and ice cream social is planned for 3 p.m.

A park entrance license is required ($30 annual or $6 for the day) but there is no charge for any of the activities.