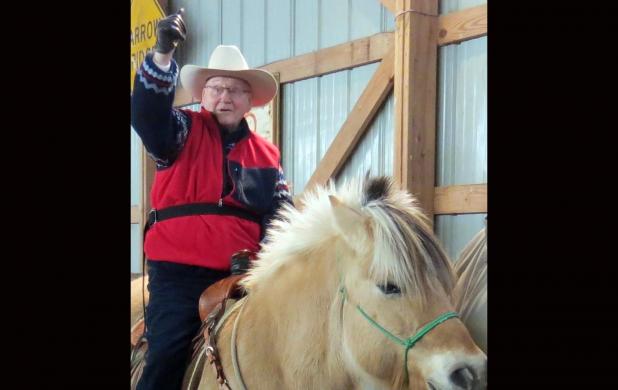 Former Resident Back In Saddle

Horses have been part of John Owen’s life since he was a boy, but he never really thought he’d be back in the saddle again at age 87.

Earlier this month, however, the long-time owner of S.D. Livestock was able to take the reins and guide Lara, a Norwegian Fjord horse, around the ring inside the horse barn at Joy Ranch. The experience was made possible through a partnership between Joy Ranch and Heart’s Delight, a program founded by the Jenkins Living Center.

Under the watchful eye of Jenkins Living Center staff, Joy Ranch wranglers and several family members, Owen was carefully moved from his wheelchair on the loading ramp to the saddle. Once he settled in, Owen gave a simultaneous smile and thumbs up – and began his ride.

“This has just been a dream come true for him,” said Owen’s daughter Kathryn Macek, who was on hand for the ride. “Horses have been important to him for a long, long time.”

The Owen siblings (Kathryn, Randy and Karen), were raised by John and Bev Owen near Britton, where John managed the sale barn for a number of years. The family also operated the Ben Franklin and Britton Realty.

“When we were young, he always had a team and used to haul us kids behind them on a toboggan,” said Randy Owen of Watertown, who added that he “grew up” in the sale barn. Watching his dad riding the Norwegian Fjord horse this week brought back a flood of great memories.

“I was truly surprised he was getting the opportunity to do this,” said Randy Owen. “It’s a pretty special day.”

For the past year and a half, John has resided at Jenkins Living Center. The idea for the ride came about after a recent interview for the facility newsletter.

“John was asked if he would ever like to ride a horse again and he said, ‘Yes, of course.’” said Kristi Gloe, marketing director for Jenkins. “The interview was recorded and so secretly the Jenkins Living Center staff went to work to pursue this as a Heart’s Delight wish for John.”

Owen’s physical therapist, Andy York, got in touch with Shawn McCall, director of guest services at Joy Ranch, and arranged for a tour of the facility. Joy Ranch is well-known for its equine programs that serve individuals of every ability, and York was convinced that Owen would be able to accomplish his ride.

“We were going to do this a month ago, but for one reason or another had to postpone,” said York.

Wednesday’s cold and windy weather threatened to get in the way of the ride as well, but the travel conditions didn’t get bad enough to reschedule.

Buffy Neuberger, activities director at Jenkins, was one of several individuals on hand who were recording Owen’s ride. While Owen’s wife was unable to make to Joy Ranch, Neuberger said the couple celebrate “date night” every Thursday night at Minerva’s. They have been married for 64 years.

directorOther wishes that have been granted by Jenkins Hearts Delight program have included a convertible cruise around the lake, a hot air balloon ride, trips to see family and a variety of shopping trips. Neuberger said that Owen’s “wish” was the first horse ride she could recall.

“We’ve heard stories about him riding his horse to and from school,” said Neuberger. While John was growing up, the Owen family lived in a farm near Waubay and Owen road his horse, “Tony,” to and from the rural school which was 2-1/2 miles away.

While he was a man of few words on Wednesday, the experience is one Owen is likely to talk about for years to come.

“Look at the smile on his face,” said Macek. “This was just awesome.”