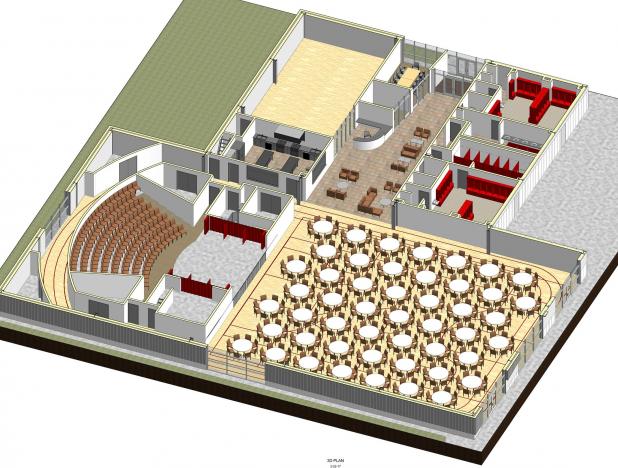 About 50 people attended a public meeting last week Wednesday to learn about plans for the proposed Britton Event Center and to provide input for the facility to be located at Hugh Schilling Field.

Project Manager Cory Bleyenburg of Co-op Architecture of Sioux Falls and Aberdeen presented preliminary plans for the 19,233 square foot single story structure to be located at the football/track complex located in the northwest corner of Britton.

Hopes are to break ground this spring with an estimated occupation date of December 2018.

The proposal includes a multi-purpose area of 7,250 square feet that would be capable of seating up to 400 people at tables. Possible uses of that area would include large meetings, wedding receptions, concerts, or various sports activities.

A raised stage separates the large area from a theater area of 1,296 square feet that features step-seating for 160 people. That area would be available for smaller meetings, theater productions, or other smaller gatherings. Dividers would be in place so that the stage could be used for either the large or small group area.

Located adjacent to the meeting and theater areas would be a kitchen. Plans would be to heat and serve food from that area but not to prepare meals.

A walking track goes around the entire meeting and theater area. There is also a reception and lobby/lounge area, along with a large 1,500 square foot room that could be used for a variety of exercise type activities such as zumba, pickle ball, a possible racquetball court, or a BB gun shooting practice area.

Men’s and women’s locker rooms are included in the plan. Those facilities could be used by teams competing in football or track at Hugh Schilling Field as well as the public.

An outdoor patio area was also included in the proposal that could be used for tailgating, receptions, BBQ’s, or possible VIP seating for football games.

At one time there had been talk of locating City Hall in the event center, but at this time that is not in the plans.

About two years ago potential donors for the proposed event center approached the Britton-Hecla School and indicated they would be willing to give a substantial amount of money to replace the Kidder Gym. Those donors were willing to come up with about $1.5 million if area residents could come up with another $750,000 to $1 million for the proposed $2.4 million project.

Pledges from the area community showed strong support for the project and donors gave the go-ahead last fall. Since that time project plans have bumped the total cost to an estimated $3.2 million, but members of the volunteer committee said several other major contributors have yet to donate pending final cost estimates.

A volunteer committee has headed up plans for the project. Britton Mayor Clyde Fredrickson, a member of that committee, said 25-30 area residents have met with the committee at various times to provide input into the present plan. He also stressed that the facility will not be just for Britton residents but also for surrounding communities.

“There are a lot of communities around us that have helped Britton to grow,” noted Fredrickson. “We’re not shrinking like some small towns, and we plan to have memorabilia on the walls around the track honoring our area communities.”

The Britton-Hecla School District demolished the Kidder Gym on the south side of the field last summer in preparation for the new facility, but plans presented last week placed the building on the northwest corner of the field north of the current bleachers. One of the reasons for that location was to have more room for possible expansion in the future. Committee members felt the location was also the best to mitigate any potential noise issues for events.

That location would require that a portion of Twelfth Avenue that runs west of the field be vacated and a street constructed between Twelfth and thirteenth Avenues. The building would also likely require moving the current long jump pits to the south side and would also occupy a small part of the current football practice field that is located just west of Twelfth Avenue.

The location was the subject of considerable discussion at the meeting. Some in attendance felt it should be located on the south side where the Kidder Gym previously stood, and committee members said the northwestern location is not set in stone.

“The city is the one entity that logically should own this,” said Fredrickson. “If it was owned by the school it would limit the use and accessibility to the public because of regulations required for school districts, and the county already has the Community Building. While we would not expect the center to make money, hopefully we would be close to a break-even point. And the city feels it can afford to add the event center to our budget without raising taxes.”

Committee members referred a number of times to an event center recently opened in De Smet that is very similar to the Britton proposal. The group toured that center and was told that its small theater area is booked out a year ahead of time. It also has a full-time center manager and has averaged an annual shortfall of about $50,000 annually since its opening.

All involved stressed the importance of the event center being a community effort.

“It has to be a joint effort between the city, school, hospital, and the entire community,” concluded Fredrickson. “I think the event center will help keep our community growing and going forward and will be great for the future.”

Bill Haywood, who also serves on the committee, said that Britton has a history of moving forward.

“This community does step up,” Haywood said. “”It is a growth thing, and what is our future going to be like 25 years from now?”

“We were given a challenge and a deadline,” added committee member Josh Kraft. “And we’ve been given a chance that a community our size usually doesn’t get.”