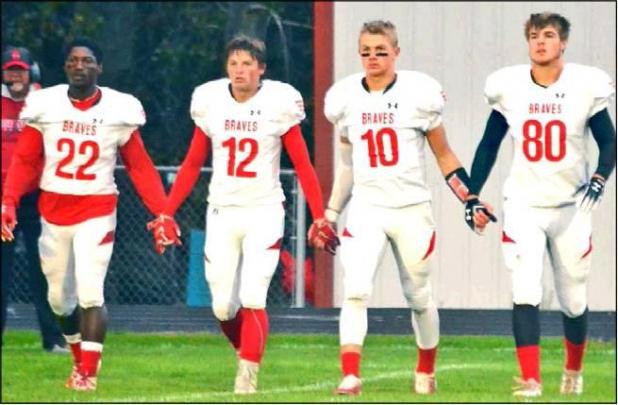 Trevor Zuehlke, who suffered a severe head injury last week, has served as a Britton-Hecla football co-captain for the past two years as the Braves posted back-to-back undefeated regular seasons. He is pictured with his fellow captains prior to the Braves’ recent 14-6 victory at Deuel. From left to right are Stanley Haskins, Jr., Cole Fosness, Zuehlke, and Wyatt Bray.
(Clear Lake Courier Photo)

His community and the entire state has rallied around Britton-Hecla junior quarterback and linebacker Trevor Zuehlke following a severe head injury suffered late in the football game at Warner on Friday.

Zuehlke was taken by ambulance to Aberdeen where he was evaluated. A CT scan showed bleeding in his brain, and he was airlifted to Avera McKennan in Sioux Falls for surgery to drain the blood and relieve pressure. The CT scan did not indicate a neck or spine injury.

Currently, he is in a medically induced coma to keep him still so his brain can heal and the swelling can go down. Another CT scan will not be done until he is past the acute phase and swelling is gone.

Following the injury Zuehlke has received overwhelming support from the state football community, area residents, and from people around the state and country.

The Marshall County WOW Coalition is planning a fundraiser at its tailgate for the opening round of the playoffs in Britton on Thursday and bracelets will also be sold as a fundraiser. The Britton-Hecla Student Council made ribbons featuring Trevor’s football number 10.

The Warner community will be passing buckets on Thursday at the football playoff game and Friday at its volleyball match; a free will offering will be taken at the Watertown-Aberdeen football game and the Webster Area-Groton Area football playoff game; Webster is doing a Hat Day on Friday with kids allowed to wear hats for $1 with proceeds going to Trevor; and Aberdeen Roncalli is planning a fundraiser on Monday night at its volleyball game.

HH Design in Britton and Ultimate Ink in Clear Lake are selling T-shirts with proceeds going to the Zuehlke family, and a lady in the Black Hills is making chains with a ring on it that says #10 Strong.

Social media has been filled with prayers and hopes for a speedy recovery. A special prayer service was held at the First Lutheran Church in Britton on Sunday evening and the church was filled with area youth groups and residents. The Langford Area football team also attended in support.

The family has established a Caring Bridge web site. The latest post was Monday night and is as follows:

“Thank you again for the overwhelming prayers and support for Trevor. It is comforting to know he has touched so many people.

Today was really a waiting day in this whole process. He is still sedated and resting. His body has been reacting to the meds the way the medical team wants to see. There is just so much that is not known at this time, and time is what we must give the process. We wish there was more to report.

We all continue to talk to him and hold his hands. They are big hands, and hands that have done many big things already. He has always had a ball or tool or toy in his hands. And he has always been willing to lend a hand to help anyone out and encourage anyone in need.

Again, all of the support and prayers for Trevor and others needing them are so much appreciated. We watched the Britton prayer service on Facebook Live and it was very moving. The support of Trevor has been overwhelming. Please keep praying for the healing of Trevor’s brain. Thank you again.

We know Trevor is strong and determined, and he will fight his way back with everything he has, because he never gives less than 200%.”