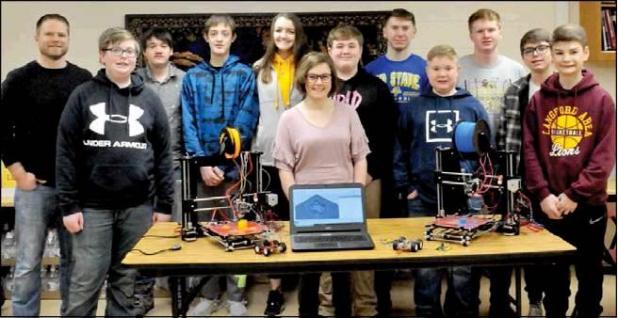 Technology has opened up a whole new world for today’s students, and a new club at the Langford Area School has begun to help youth take advantage of those opportunities.

The Langford Robotics Club began in mid-October and about a dozen students are participating. Students meet with advisor Brandon Alberts at the school on Monday nights for a couple of hours.

Alberts is a 2007 Langford Area graduate and received his mechanical engineering degree from South Dakota State University in 2011. He also earned a master’s degree from the South Dakota School of Mines & Technology and is currently employed as an engineer for Mereen-Johnson in Webster.

The club is 100 percent voluntary by students. Funding goes through the school but is provided by area sponsors. Although the club meets at the school it is not school-driven.

“We had some initial meetings to help gauge the interest from the school and students, and once we had that interest I went out and talked to a few reps in the industry,” said Alberts. “We’ve had pretty overwhelming support.”

Horton, Inc., of Britton, Agtegra Co-op of Aberdeen with an office in Langford, Full Circle Ag based out of Britton, and the Langford Area Foundation have all made contributions to get the club off the ground. Alberts’ brother, Nick, an electrical engineer in Aberdeen, has also helped out as a mentor and support person for the club.

The club’s first project was to build its’ own 3-D printers. The printers inject plastic like a hot glue gun one layer at a time to print objects and is a big thing trending in the manufacturing industry. They are even being used for such things as dental implants and bone replicas for orthopedics.

“We bought the materials and had three different groups each build their own printer,” noted Alberts. “They built it mechanically, did the hardware and a little bit of coding software work, and are currently making successful parts on the printers. Once you understand the concept and how it works, it is the basis for so many things, especially in the manufacturing industry.”

Now students are in the process of making an army tank (about 6x4 inches) with tracks. Everything is made out of plastic from the 3-D printers. Students will learn coding to be able to program the controller themselves, and the tank will also synch with their mobile phones and can be controlled with Blue Tooth.

“Doing all the electronics and code will continue to advance the students’ skills,” stressed Brandon. “The kids all come on their own to learn about this stuff, and they have the excitement to keep coming.”

For some, meeting only on Mondays is not enough.

“The club is opening the kids’ eyes to what is out there and some of them are eating it up and spending a lot of their own time growing their capabilities,” added Alberts. “A couple of kids have been taking printers home and printing stuff on their own time.”

“Tradition is that to get that big rewarding career you have to leave, that you can’t get that in a small town, but that is so far from the truth. It’s amazing the gems we have all over in our area, and all those come with great opportunities.”
----Brandon Alberts

When club member Tucker Hardy was asked about his favorite part of the club, his simple answer was, “Everything.”

Alberts said the club is open to junior high and high school students, and he emphasizes that it’s not just for those kids interested in engineering or manufacturing.

“It’s for anybody interested in a moderately technical field like auto mechanics or precision farming or who just like to tinker with things,” said Alberts. “The world is just getting more technologically advanced, and those are some of the things we are doing in the club. And a lot of the younger kids can’t wait to get of age.”

Club member Liberty Hermes does want to go into science and engineering, and she joined because she “thought it would be interesting.”

“Learning new things is my favorite part, and I would like to build more types of interesting machines and expand on them.”

Britton-Hecla has a robotics club tied in with a schooloffered class, along with Groton and Webster. Alberts predicts the interest in robotics will continue to grow.

“This first year we wanted to be on our own schedule and leave it up to the kids on how committed they wanted to be and how far they wanted to go with it. They’ve been extremely excited, and we may look at getting into some robotics competitions next year. We also have a lot of young students and we would like to continue to grow the complexity of our projects. We already have a good foundation and I think we can expand on that to challenge us even more.”

But more importantly, Alberts sees the club as a way to help teach life lessons as well as encourage youth to look at careers right here in northeast South Dakota.

“Another piece of this is that it teaches persistence. You don’t just throw pieces together and everything works perfectly. It’s pretty true to the real world. You get to the end and all the details have to be worked out, and it helps teach kids to see a project through, to learn about work ethic, and how to get along with other people.

“It also shows kids the opportunities they have for careers right here at home,” Alberts noted. “Tradition is that to get that big rewarding career you have to leave, that you can’t get that in a small town, but that is so far from the truth. It’s amazing the gems we have all over in our area, and all those come with great opportunities. We have a lot of students that want to be here and need to know those opportunities exist.”