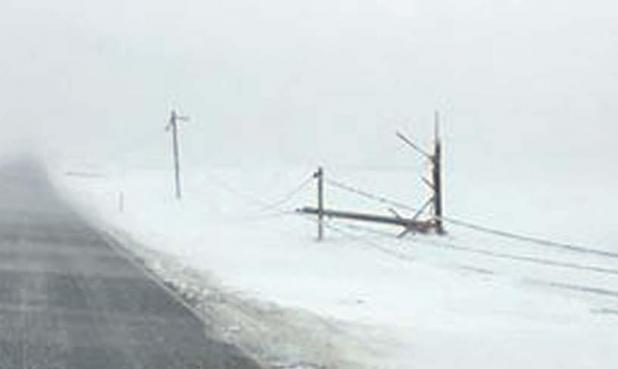 A Christmas storm that started with heavy rain and ended up with snow and ice left behind snapped power poles and hundreds of people without power.

Rain began on Christmas Eve and continued most of Christmas Day.

That was followed by cold temperatures that turned most roads, sidewalks, and parking lots into skating rinks. The moisture also froze on power lines and strong winds clocking over 50 miles per hour broke off hundreds of the poles.

Many area residents were still without power Tuesday afternoon. Officials said it may take several days to restore power to all customers.

Gov. Dennis Daugaard declared a state of emergency for all of South Dakota following the storm. He ordered that state government technical resources be made available to support county governments in efforts to restore normal travel conditions and emergency services. Those technical resources will be coordinated by the state Department of Public Safety’s Office of Emergency Management.

“Every part of South Dakota was impacted in some way by this holiday storm,” said Daugaard. “If it was not heavy snow, it was freezing rain and high winds. Many South Dakotans and visitors had to change their Christmas plans because of the storm’s impact.”

On Monday 13 electric cooperatives in western South Dakota and the northern half of the state reported outages to 19,000 homes and businesses. At least six other cooperatives had also experienced outages but were able to make repairs by Monday afternoon.

East River Electric Power Cooperative, headquartered in Madison, has damage in northeastern South Dakota from the Watertown and Clear Lake area north to the North Dakota border. Otter Tail Power Company is also having problems in the area, which in turn is affecting East River. Western Area Power Administration lines are also affected in the Summit area.

East River had 10 substations without power Monday afternoon and continues to assess storm damage. It is aware of at least 260 transmission structures damaged in the storm.

Forty line workers from eight South Dakota cooperatives began arriving at five of the hardest-hit cooperatives Monday afternoon and continued to arrive into Tuesday. Additionally, assistance from neighboring states has been requested with those crews also arriving yesterday (Tuesday).

Crews were working by Lake City along Highway 10 on Tuesday afternoon to begin the process of restoring power to Lake City, Roy Lake, Clear Lake, and extending south towards Fort Sisseton. Hopes were to have power restored to those areas by today (Wednesday).

The Grenville Substation didn’t have an expected timetable for restoration as of Tuesday afternoon. The power provider has downed poles, structures, and substations that feed that substation. Along with the transmission problems, the west circuit out of the substation has extensive damage with over 60 poles down in the area. Crews will not be working in that area until power is restored to the substation.

Lake Region Electric said that an additional 30 linemen were helping to restore power in its service territory. The downed pole count as of Tuesday afternoon was 200, which is expected to grow as the lines are patrolled.

The company did say that the Britton, Langford, and Veblen substations were all on as of Tuesday afternoon.

Travel remained difficult with many roads still icecoated. Walking was even hazardous as sidewalks were slippery from the frozen rain. Tree branches were also down around the county, victims of the combination of freezing rain and strong winds.