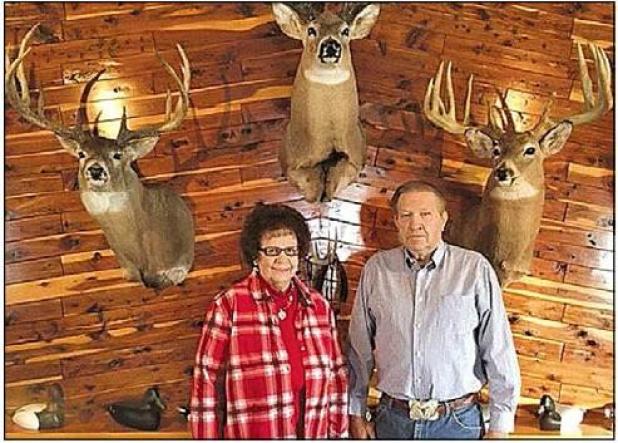 Muriel and Neil Bien stand before a wall of deer from their property located between Britton and Veblen. They’re among the top 25 largest whitetail killed in South Dakota, “a tribute to the conservation and management done on the Bien property over many years,” said family friend John Cooper.

Neil Bien of rural Veblen considers the hundreds of wetlands on his property as his “treasures.”

People Of The Community

The Bien family has been careful caretakers of their land at the tip of the Coteau Prairie in northeastern South Dakota for generations, but it was a family friend who put the value of it all in perspective.

from outer space that inspire one producer to take care of his land.

Neil Bien raises a cow herd near Veblen at the northern end of the Prairie Coteau – a glacier-formed rolling landscape that stretches along the eastern edge of South Dakota. Around his Marshall County home, the prairie is spotted with lakes and wetlands. Bien guesses it was the water that attracted his grandfather, Ole, who came from Norway where lakes and waterfalls were abundant. Ole Bien filed his homestead claim the year before South Dakota became a state, and he lived in a dugout where his first four children were born.

Now Neil Bien, 75, lives on that exact spot in a log home he built in 1975. He’s overseen 55 calving and planting seasons, and he carries on the stewardship his grandfather and father made a priority. Ole valued the water they had, and he never drained a wetland. While others were adding drain tile and tilling up prairie grass to add more crop ground, Neil Bien was restoring wetlands on land he added to the operation.

“We have literally hundreds of wetlands on our properties, and we consider them treasures,” Bien said.

The wetlands support fish and wildlife that Bien enjoys fishing and hunting. They also make his cattle operation productive. The cows do best with healthy, diverse grasslands and natural wetlands, he said.

Bien and his family like to share their land with others. Family friends visit from all over the country to hunt and fish.

His brother Lyle was a fighter pilot in the Navy, and his pilot friends were always curious to visit the plains of South Dakota, Bien said. One fellow fighter pilot, John Creighton, went on to become an astronaut on three space missions for NASA.

“After he saw an Earth rise, he had a completely different view of Earth,” Bien said.

As he tells it, Creighton realized that every breath of air that he took in the space craft came from Earth. Every drop of water and morsel of food came from the earth. There is no other place to get these things, so we’d better take care of what we have, was his conclusion, according to Bien.

Those thoughts from space inspired Bien to appreciate the resources his land provides.

Another friend, a biologist who came to hunt ducks on the Bien land, was impressed with the Prairie Potholes wetlands. He took up carving and made a collection of 45 species of North American waterfowl, which Bien now proudly displays.

On a rock in one pasture, Bien placed a plaque with the names of five conservationists and friends. They’re people who saw something special in the prairie land. The names on the rock, the stories from space and the wooden ducks – all these serve as reminders for Bien.

“Allow yourself to be inspired,” he said.

He often asks his visitors for an outsider’s view on what impresses them most when they come to South Dakota. He expects it when they list the awesome sunsets and sunrises. But some bring up things people who live here can easily take for granted: Being able to catch a fish, see the Milky Way, watch a thunderstorm, witness the birth of a calf.

“On a good day, we could see every one of them,” Bien said. “We’re never short of things that inspire us.”

One of those friends who enjoys a visit to the Coteau is John Cooper, retired secretary of South Dakota Game Fish & Parks.

Bien was serving on the game, fish & parks commission when Cooper came to South Dakota in the late 1970’s. Bien was quick to impress upon him his distaste for the fall fallow routine that many farmers used. He was concerned with adding natural nitrogen to the soil using manure, and he was one of the first guys Cooper heard talking about rotational grazing.

“He knew a lot about moving those cows around,” he said.

Bien also made clear that the department should look to landowners when making decisions about hunting and fishing. In South Dakota, farmers and ranchers provide a large share of the wildlife habitat, Cooper pointed out, and it’s important to have a balance between sportsmen and producers.

Over the years, Cooper has had the chance to hunt on Bien’s property on a number of occasions. The land’s diversity of rolling hills and wetlands is some of the best you’ll ever see, Cooper said.

“I don’t know of any place in South Dakota that has more history to it,” he said.

There are unique places on everyone’s land, and Bien has a particular few on his ranch that he holds dear. A hill in one of his pastures, called Pleasant Peak, is the highest point in the Coteau.

Like looking down from an airplane, he can see three states with cattle dotting the land and a network of wetlands and creeks laid out before him. On an eastern slope, there are draws and coulees. A grove of slow-growing native oaks includes trees that are so big, two people couldn’t reach around them. The oldest are more than 300 years old.

When the French mapmaker Joseph Nicollet, came through the area in the 1830s, the trees were already more than 100 years old. It’s a fact that amazes Bien. Nicollet journaled about the top of the Coteau.

“He saw trees that are still alive and still in our pasture,” Bien said. “I think that’s a real testament and an inspiration to longevity and patience.”

Patience often runs short in the way we live today, Bien pointed out, and we exploit our resources. It’s important to live sustainably and preserve something for the future, he added.

Bien has planted more than 100 acres of trees of his own. He aims to operate his ranch in a way that’s close to nature – conserving water, keeping fields green with cover crops and cross fencing to better manage grazing patterns.

Last year, pastures supported his cattle into February. They grazed in corn stalks, even dug through the snow to find ears of corn. Other than supplementing their diets with mineral cake, he didn’t feed them hay until Feb. 18. It’s one way taking care of the land has allowed the land to take care of his herd.

“I think today’s farmers and ranchers have a huge responsibility,” he said.

Ranchers have to provide for themselves and their families, but it’s their job to also care for their livestock, their land and the greater ecosystem, Bien added. Ranchers manage through droughts, blizzards and whatever else Mother Nature throws at them.

“Our family, like all farm and ranch families, has a connection to the land,” he said.

Bien and his wife, Muriel, have two sons, Matt and Lance. While they’re each set in their careers, one as a doctor and one who owns a pharmacy, Bien still holds out hope of keeping the ranch in the family. His brother’s son-in-law works with him on the ranch, and one grandson in particular has taken an interest in hunting, fishing and production agriculture. Bien is confident those interests will go far in protecting the land into the future.

“If we can introduce people to the joys of things we take for granted – like hunting and fishing – we can let nature inspire them,” he said.

Cooper, the retired game, fish & parks secretary, said Bien’s family has done an amazing job keeping the most valuable natural systems in place on their land. He credits his friend with making sure the land is treated right.