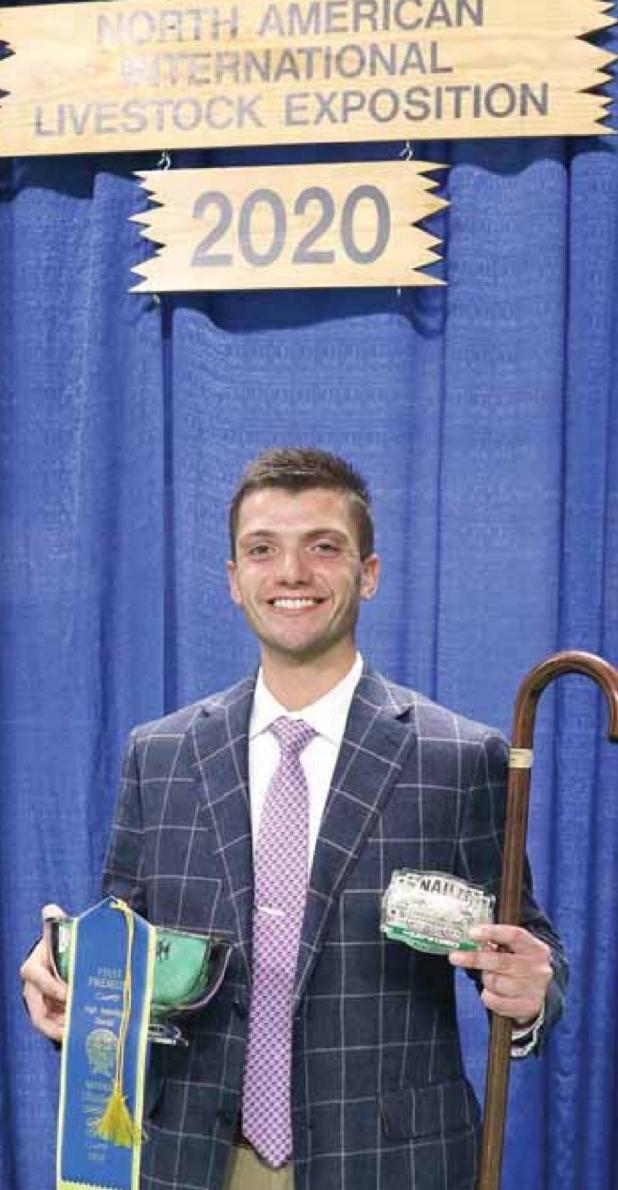 Britton native Tyler Bush earned the individual championship at the National Livestock Judging Contest in Louisville, KY, last week Tuesday. He is just the third student from SDSU to ever win the national title in the 120-year history of the event.

Britton native Tyler Bush has followed in his family’s footsteps in the livestock judging world, but now he has bragging rights.

The South Dakota State University senior earned high individual honors in the National Livestock Judging Contest in Louisville, KY, last week Tuesday. Bush became only the third individual in the history of SDSU to claim a national title in the 120-year history of the event.

“I definitely couldn’t ask for a better way to go out,” said Bush, who led the SDSU team to a third place finish, the school’s best in a number of years, and topped a field of about 100 contestants in the individual competition. “An SDSU student won the title in 1962, 1974, and now 2020, so it’s a pretty cool honor. It definitely took a lot of time and dedication out of my college career to achieve that goal, but I definitely wouldn’t trade it for anything.”

Bush grew up in the livestock business. Bush Angus, located west of Britton, has been a fixture in the livestock world for decades, and Tyler’s father, Scott, and grandfather, Jim, have been livestock judges for years.

“It’s kind of come full circle,” said Bush. “My dad and grandpa also judged at SDSU and it’s definitely something we have taken a lot of pride in and has become a family tradition.”

It all began in Marshall County 4-H.

“I definitely got my start in 4-H,” recalled the new national champ. “Back when Tyler Melroe was in the extension office he went over livestock judging, and just listening to my dad and grandpa taught me a lot.”

After graduating from Britton-Hecla High School, Bush knew he wanted to get into competitive livestock judging, and he attended Hutchinson (KS) Community College for two years before attending SDSU for his junior and senior years of animal science studies. During his senior year he competed in around 15 contests, all in preparation for the national event.

“Winning Louisville is the pinnacle of a career and everybody kind of dreams of that last contest,” said Bush. “It’s pretty neat to go into that and be able to show everybody how hard you have worked, what you have learned, and what kind of talent you have.”

It was actually the third time Bush had judged at Louisville. His first experience was as a 4-H’er where he finished fourth, then a 19th place finish in the junior college competition with Hutchinson, topped off with his national title last week.

Bush had the opportunity to compete with Britton-Hecla classmate Brooke Skoglund, who was also a member of the five-person SDSU team.

“Brooke was a very key part of our team and it was very fun to get to judge with her again. It was cool to come back to SDSU and help each other out and watch her grow as a person and evaluator.”

Melroe, who at one time coached the Livestock Judging Team at SDSU, pointed out the significance of Bush’s national title.

“This is an extraordinary accomplishment. The best equivalent I could give would be a Division 1 athletic event where people compete as individuals and accumulate individual scores for team awards. The only difference is there is only one champion, not multiple. And you only get once chance to participate in this contest your entire career – it’s always one and done.”

Melroe said the contest has also played a crucial role in the development of the livestock industry.

“I believe it has served as the most significant activity in accelerating livestock improvement over the last 125 years in the United States,” said Melroe.

“The contest does start to mold the minds and opinions of what’s to come in the livestock industry,” echoed Bush. “I think it plays a huge part in pushing to make things better.”

At the national contest there are 12 classes of sheep, goats, hogs, and cattle. Contestants must judge those classes and also give eight sets of oral reasons for why they picked eight selected classes as they did and are judged on how accurately and impressively they can do that.

Bush earned a sweep – placing first in both categories – and scored 945 of a possible 1,000 points, nudging out the second place person by five points.

Future plans for the Britton native are to return to his hometown after graduation in May and become a part of the family operation. He also definitely plans to continue to judge livestock.

“My dad gets to judge on the local, state, and national level, and I will have the opportunity to kind of follow suit and judge across the country either alongside him or by myself,” said Bush. “It’s exciting and has been a big goal of mine, and winning at Louisville kind of sets me up to be at the top of the list for some people. It doesn’t hurt.”

For now the SDSU senior is going to spend a little time to just enjoy his accomplishment.

“Louisville is definitely the pinnacle of your career and what you look forward to and work for,” concluded Bush. “I know the livestock judging world isn’t known to a lot of people, but when Tyler Bush lays his head down at night and dreams of winning Louisville and that dream comes true – that’s pretty special for sure.”

“I definitely couldn’t ask for a better way to go out...I wouldn’t trade it for anything.”