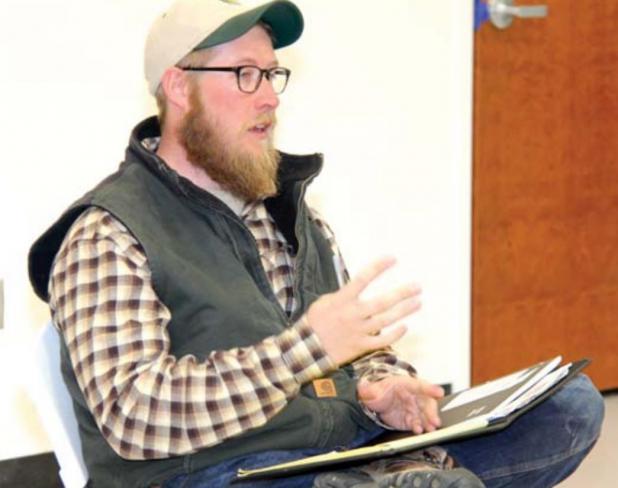 Community Forester Jon Livermore of Watertown spoke to 34 Britton residents about the emerald ash borer at a community meeting on Thursday. The city has begun cutting ash trees as a proactive step in preparing for the pest.

Ash Borer War Is One That City Cannot Win

Britton residents are watching the war begin, but it’s one that city officials know they can’t win.

The emerald ash borer is coming — sometime. When it does arrive it means certain death for the community’s ash trees unless they are treated — a cost-prohibitive option for most. But what the city can do is to be proactive to keep residents safe and to save taxpayers a bunch of dollars when it does hit northeast South Dakota.

Thirty-four residents attended a community meeting on Thursday to hear what South Dakota Community Forester Jon Livermore of Watertown had to say about the pending arrival of the ash borer that is already found in the eastern half of the United States and the eastern half of Canada.

“Sioux Falls is the only city in the state with a certified population of emerald ash borers,” said Livermore. “But it is coming and it could be here already. It takes about four years after its arrival to be noticed.”

Livermore said that before the pest naturally migrates to northeast South Dakota it will likely be transported by people.

“You live in lake country and people come from Iowa and Minnesota where the infestation rates are off the charts. This is what I would consider an at-risk area, and people will move it here by carrying it on a boat tarp or camper or in firewood.”

Livermore stressed the importance of being proactive rather than reactive in preparing for the arrival of the pest by cutting down ash trees. That does eliminate the pest’s food source, but more importantly it is a safety issue and will save local taxpayers lots of money.

When the ash borer infests a tree that tree becomes very brittle, creating a danger to residents and also resulting in a much higher cost for removal.

“They explode like glass because they are so brittle,” warned Livermore. “Some tree removal companies won’t touch a tree if it’s infected because it’s a lot more dangerous. The removal of a 30-inch ash tree would cost around $800, but if it’s infected that cost could by eight to 10 times higher.”

That is unlike the Dutch Elm disease that hit the state decades ago. When those trees die the wood is not nearly as brittle as ash trees and dead trees can be safely removed.

Britton city workers, who have received a break from snow removal in recent weeks, have spent their time getting a jump on tree removal on city-owned boulevards in the city. Public Works Supervisor George Flanery said that city workers and a couple of private contractors have removed about 200 trees so far this winter. Stumps will be removed, holes will be filled with black dirt and grass seeded this summer.

Flanery’s goal is to have all of approximately 860 ash trees on city property removed in the next four to six years. City residents are also encouraged to consider cutting down trees on private property for safety reasons and to save the extra expense of removal after they become infected.

There is an option to treat trees by injecting a chemical, the only treatment option that Livermore recommends. Due to chemicals used, the treatment must be done by a certified applicator and the cost would be $180-$300 per tree every three years for the life of the tree. The treatment is both curative and preventative. Emerald ash borers can be stopped with treatment if the tree has less than 40 percent canopy loss. Livermore said it doesn’t make sense to treat a tree until the ash borer is found in the area.

An indication of an emerald ash borer infestation is a V-shaped hole. Woodpeckers also feed on the pests, so woodpecker damage to a tree could indicate that the borer is present. The insect is about the size of a grain of rice and a bright emerald green and it stays right underneath the bark of the ash tree.

Livermore did say that cold weather can help control the ash borer, and he said Britton is the coldest place in the state. There is a 90 percent mortality of ash borers if the temperature is 30 degrees below zero for at least eight hours.

Flanery said the city is working with Livermore to develop a policy for re-planting trees on city boulevards. Types of trees planted and the location of those trees on boulevards are important issues so that they do not create problems for city snow removal equipment. The city is in the process of putting together a list of acceptable trees that do well in this area.

Livermore said it is important to diversify the types of trees planted to help eliminate future problems. Cities in the state have had a predominance of elm and ash trees and pests have attacked both of those varieties. He said an insect is also now becoming a threat to maple trees.

“A 10 percent stocking rate per species is what we would consider a healthy stand,” Livermore said. “Our goal is to make a game plan so that we don’t perpetuate a problem, and our end goal is to plant more trees than we remove.”