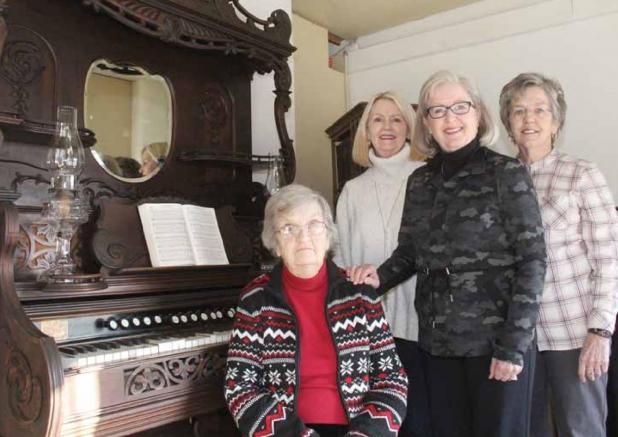 This pump organ, originally owned by Louise Fiegel of Britton, is 109 years old and recently found a new home at the Marshall County Prayer Rock Museum. From left to right are Louise’s daughter, Joyce Nelson, of Britton and her daughters Nancy Krahler of Bismarck, ND, and Suzanne Svard and Kathy Buisker, both of Britton, Additional photos on Back Page.

This is a 109-year-old love story about a Beckwith pump organ.

Louise Fiegel was the original owner of the organ. Louise’s dream of attending Concordia College in Moorhead, MN, was put on hold for many years while she cared for her brothers and eight-year-old sister during her mother’s illness and subsequent premature death in 1912.

The story behind this organ as related by Louise’s daughters is that her father, Torger Gronseth, bought it for her perhaps as a comfort gift because she couldn’t start college until 1914. Like many families, history is lost when questions aren’t asked sooner but rather later.

Louise and George Fiegel were married in 1919 and their house wasn’t big enough for the organ so it sat silently in Louise’s childhood home a few miles down the road. The organ remained in the Gronseth house where Louise’s bachelor brother Marvin lived until his marriage in 1971 and then it was moved to the Fiegel house.

Louise’s family never heard her play the organ, and we can only presume she played it as a young lady while living in her father’s home. During the 11 years the organ was in Louise’s home, it was played by grand and great-grand children with gusto and loss of breath as the youngsters used the foot pedals!

After Louise’s death in 1982, her daughter, Ann Stohl, had it moved to her home in Yakima, WA. In 1993 it was moved to Tustin, CA, to daughter Doris Rogers’ home.

Doris died in 2018 and once again the organ was moved a short distance to her son, Gregg Rogers’ home. Finally, after texts and calls, the much loved organ was transported to South Dakota and placed in the Marshall County Prayer Rock Museum in October, 2020.

Family members expressed their heartfelt thanks to Gregg & Kirk Rogers and Dana Vigneault, the children of Doris and Bill Rogers, for shipping the organ to South Dakota and donating to the Marshall County Museum.