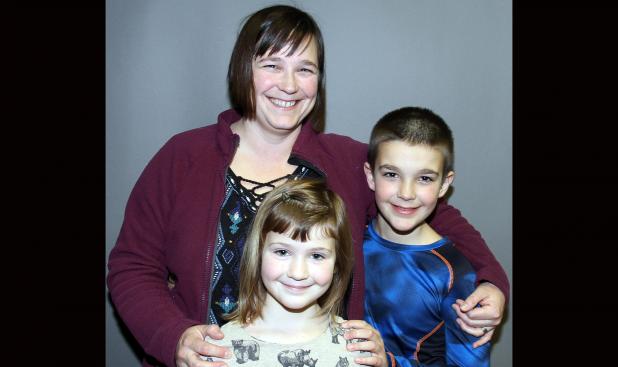 ‘Spare A Rose, Save A Child’

Britton-Hecla first grader Ruthie Moeckly gets insulin injections every day to help control her Type 1 diabetes, but thousands of other kids around the world die young because they don’t have access to that insulin.

Now Ruthie and her family – parents Ryan and Amy, Brother Ollie, and sister Zet - are spearheading a local effort to help save kids’ lives. It’s called the “Spare a Rose, Save a Child” campaign.

For $5, the cost of a Valentine’s Day rose, a child can receive the medication they need for a month. A dozen roses can provide a year of life for a child with diabetes.

Funds go through “Life for a Child,” an International Diabetes Federation program which provides life-saving diabetes supplies, medication, and education that children in developing companies need to stay alive

“Last year in the kids’ Valentine’s Day package we included a $5 voucher for the charity, and that’s when Ruthie said she wanted to work this year to try and get more insulin to other kids,” said Amy.

The family’s local fundraising effort will run from Feb. 1-14. Contributors can donate online at www.sparearose.org or contact the Moeckly family directly at 605-448-2300.

The Moecklys moved back to Britton about four years ago from Portland, OR, to be closer to family. Ryan is able to do his job online, while Amy, who has a PhD in biology, teaches some courses on-line and also teaches classes at Northern State University.

Obtaining insulin is a life or death situation for thousands, especially in developing countries. Estimates are that over 497,000 children under 15 years of age have Type 1 diabetes, and lack of insulin is the most common cause of death for those children. An estimated 80,000 - 100,000 kids are not getting that insulin, and the estimated life expectancy of a child who has developed diabetes is less than a year.

“I can’t imagine being a parent and knowing that medicine is available but not having access to it,” Amy noted. “We just want people to buy one less flower for a loved one and instead give it to children who need insulin.”

Ruthie, now age 7, developed her diabetes when she was three years old.

“We noticed that she was thirsty and had to pee a lot,” recalled Amy. “She also probably lost a little bit of weight. She will require insulin her entire life.”

Type 1 diabetes was formerly called juvenile diabetes and is usually diagnosed in children and young adults. Only five percent of people with diabetes have this form of the disease. For still unknown reasons, a person’s own immune system attacks the cells that produce insulin. As a result, a person with Type 1 diabetes can no longer produce insulin.

The body breaks down the sugars and starches we eat into a simple sugar called glucose, which it uses for energy. Insulin is a hormone that the body needs to get glucose from the bloodstream into the cells of the body.

The disease doesn’t slow down Ruthie. She is a normal, active first grader but does have to monitor her body’s glucose level and watch what she eats. If her glucose is high she needs insulin, if it’s low she needs carbs. A lot of things need to be handled during the day. Modern medical technology, and the availability of insulin, makes it all manageable, but it is a family and community effort.

“It might sound like a lot of work, and Ruthie has to be really aware of how she’s feeling, but compared to 20 years ago there are so many things to help us, and the community is so supportive,” stressed Amy.

“We have an awesome school nurse (Heather Bosse) that makes a huge difference, Ken’s Food Fair orders special gluten-free food, Cindy Bremmon at Quarve Drug helps in more ways than I can say, and the family all helps a lot. It’s nice being part of a community that watches out for us.”

Ruthie’s brother, Ollie, doesn’t have diabetes, but it can be difficult watching what his sister goes through.

But Ruthie, who is just one of two students at Britton-Hecla that has been diagnosed with Type 1 diabetes, takes it in stride. She admits that the hardest part is getting “needles stuck in her” on a regular basis, but there are also some perks.

She has an advantage over her fourth grade brother because she has a phone as a receiver for her continuous glucose monitor, and “I get candy when my blood sugar is low.” But she also knows how her disease can make her feel, and she wants to help others in the same boat.

“I think the best thing about this is that kids that would get sick without insulin will get to have insulin,” stated Ruthie.

“We’re just trying to help other families so they can continue to have their brothers and sisters with them,” concluded Amy.