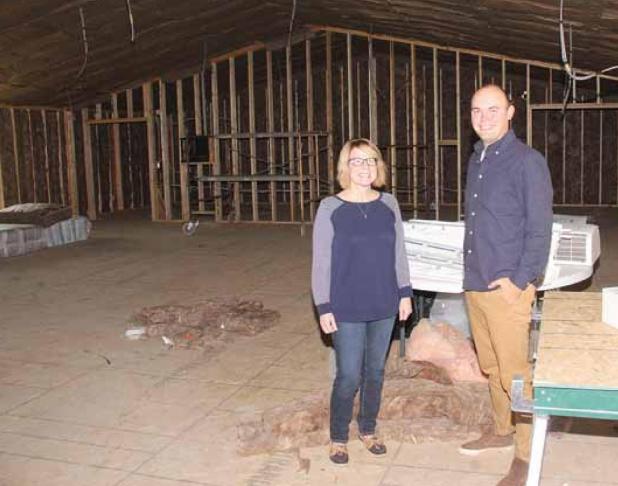 Rose Hill secretary Judy Johnson and Pastor Mike Honl are pictured in the new fellowship hall at the church located about 12 miles northeast of Langford. The growing church is in the midst of a $500,000 renovation project.

A “Sharpie Party” was held last summer instead of a normal groundbreaking for a renovation project at the Rose Hill Church northeast of Langford. Congregation members penned Bible verses or words of encouragement on 2x4’s that will become part of new classroom and office space at the church.

In a time when many rural churches are struggling to survive, Rose Hill Evangelical Free Church located about 12 miles northeast of Langford is going in the opposite direction.

In fact, Pastor Mike Honl, and his congregation are having growing pains. Sunday worship numbers have doubled in the past six years to about 120 people (pre-COVID), including a large number of younger members, and Sunday School space is tight to say the least with kids using makeshift classrooms.

“Someone who does not attend our church asked me, skeptically, ‘What brings that many people to a church in the middle of nowhere every Sunday?’ said Pastor Honl. “I honestly can’t explain it. Except to say: God is doing something at Rose Hill.”

It became obvious to the congregation that if it was to continue to grow the facilities would need to be expanded. The solution? A two level addition adding a total of 4,000 square feet and a complete remodeling of the church that is expected to be complete by the end of the year.

Pastor Honl admits that when the congregation set a fundraising goal of $500,000 for the project there were some skeptics.

“We started down this road about three years ago and went back and forth at times wondering if it was the right thing to do, especially way out here. But we felt God was moving us in this direction. The main thing is that we have lots of young families and the future is wide open for us to continue to grow.”

That “miracle goal” was nearly reached through a fundraising effort that including present and former members of the congregation.

“Our fundraising advisor said that the $500,000 figure was probably not realistic and called it our miracle goal,” said Pastor Honl. “But we ended up coming very close to that goal. It was exciting to be a part of.”

Rose Hill’s story began in the years following an 1898 revival when the first missionaries hosted tent meetings in the community. In 1907 the church was organized under the name, Rose Hill Scandinavian Free Church Mission, but later became known as the Rose Hill Evangelical Free Church. The Sunday School program, started in 1912 at a local schoolhouse, was important in the growth of the church and that remains true today.

Now, 25 years later, the “The Lighthouse on the Hill” is building again to continue its mission.

“The whole building will look quite different,” noted Pastor Honl. “There are not many areas that will not be touched by construction.”

The two-story addition will house the Fellowship Hall and a storage area on the top level and classrooms and office space will be located on the lower level. The remodeling of existing space will result in a large foyer area that will serve as a casual meeting place for congregation members and guests. A new kitchen will be located between the foyer and the new fellowship hall.

“One of the trends in churches is for a foyer area to be a place where people can meet and hang out before services or after,” said Pastor Honl. “We took out some walls and added some, and we are more than doubling the size. Some were doubtful, but I think it will become people’s new favorite place.”

The sanctuary will also be opened up, turning office space into seating area, and an additional 75 seats will be added to boost the “packed” capacity to about 195.

The 0-10 age group is the largest demographic in the Rose Hill Church, and the congregation has always placed a strong emphasis on youth ministry.

“A few years ago I had seven weddings in one year, and every one of those couples came back to be a part of the church,” Pastor Honl recalled. “And we have a very active Young Adult Ministry Group (YAM).”

It was that youth ministry that drew Pastor Honl and his wife, Becca, to Rose Hill eight years ago. A Minneapolis, MN, native, Pastor Honl graduated from North Dakota State University and then attended Trinity Evangelical Divinity School in Chicago, IL, where he did an internship under Britton native Lee Eclov. Eclov pointed the couple towards his home church of Rose Hill.

“We weren’t looking to come to a rural area, but we did have family close by in Bismarck, Minneapolis, Leola, and Lidgerwood, ND. And when we visited we really liked the people here, liked the fact that they had a really active youth group, and felt a strong call,” said Pastor Honl.

“One of the things we’ve tried really hard to do is to be more outward focused and doing things with the community. We work with the Food Pantry on a monthly basis and try to participate in more community events.”

Despite being “in the middle of nowhere” Pastor Honl is excited at the potential he sees for his congregation.

“We feel we draw people from a 31-mile radius and that includes about 6,000 people. In recent years there have been more young people staying in the area, and we have seen consistent growth. We’re excited about the future.”